David talks us through the latest addition to our clubs

One of the biggest challenges the company faces is figuring out how to reach new customers and introduce them to the clubs for the first time. This is especially tricky at Christmas where there are so many different push and pull factors and people are already getting bombarded with offers and gift ideas.

How could we get people to make their first visit at the busiest time of the year? How could we give customers another incentive to visit?

After some research, gift cards seemed to be the most effective way to achieve these goals. No other casino in Ireland is doing them, and nobody else has the locations we have that make it so attractive to give a gift card that can be used in 8 different spots around the country.

The marketing team set about designing a prototype of the gift cards to show to the directors. After receiving some feedback and design changes, we moved the project over to our IT department to hash out how these gift cards would be recorded in terms of purchases and redemptions, and ultimately what metrics would be used to measure the success of this project.

The setup we chose was to create a series of €20 and €50 gift cards that would be activated once sold and could then be used at any club in the business. We also designed a gift card holder and enveloped to complete the look.

Launching just before Christmas, the gift cards were initially a bit of a slow burn, but they soon gained traction with our members, with many opting to get one as a stocking filler for their nearest and dearest. We also ran some promotions on social media to give them out as prizes which helped put it into peoples minds.

From inception to delivery, this was one of the quickest turnaround times on a project that Marketing and IT have done. There are still things that we’d like to change, for example giving gifters more choice on the amount you could put on a card, but we’re really happy with the first run of this as its been really smooth for staff and players to get to grips with. 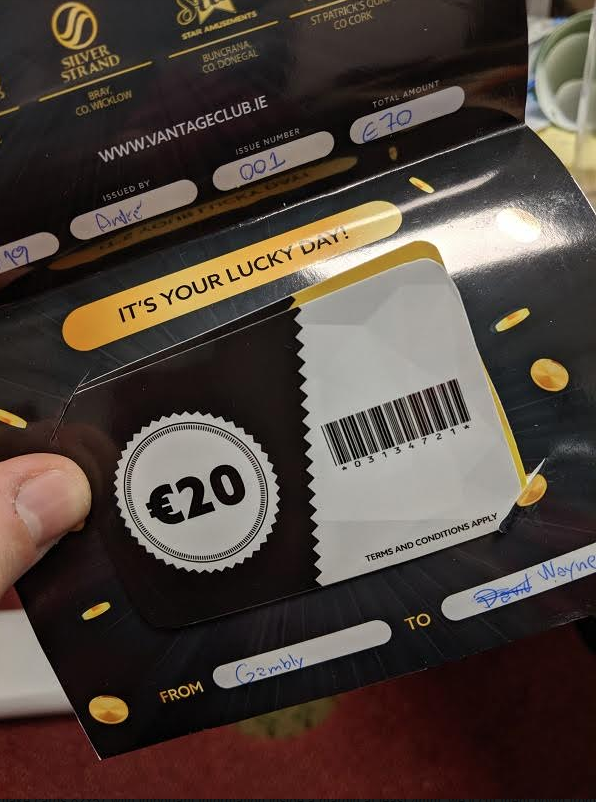 You can get a gift card in any of our Vantage Club locations today.